One of the primary goal of building software is to meet the business goal. Weather it be a simple shopping list application or a large banking application, they exist to solve a problem. As the software grows in functionality it need to be able to cope with changing business requirements. Well written software can accommodate changes quickly without affecting other parts of the application. With the growth of software many design patterns and software architectures have emerged. Whatever the software design architecture is the end goal here it to build robust software that can provide the business solution while being maintainable and easily testable. The goal here is to create application that not only satisfy the business requirement but also is robust, maintainable, testable and flexible enough to adapt to growing changes.

The idea of clean architecture is quite simple and encourages to build software that is 1) Independent of frameworks, 2) Testable, 3) Independent of database, 4) Independent of User interface and 5) Easily testable. Clean architecture can be visualized by 4 layered onion shaped diagram, each layer representing a component of the software. The innermost layer is data specific and deals with getting the data required by the software to run. The layer above it is where all the business logic is. This layer gets the data from the data layer and performs necessary logic. Presentation layer acts as the bridge between UI layer and business layer. UI layer is where all the framework specific stuff happens. It has all the android components, fragments and deals with building the user interface and rendering UI components. The important rule here is the outer layer is dependent on the layer right below it and not the other way around.

The software is broken down into 3 tiers 1) data layer, 2) domain layer and 3) presentation layer. Data layer deal with where the data comes from and presentation layer deals with how the user interface is presented. The business layer in middle is unaware of how or where the data comes from and how the user interface is rendered. This allows us to keep the business logic independent of data and presentation. Data mappers are used to pass the data between layers. 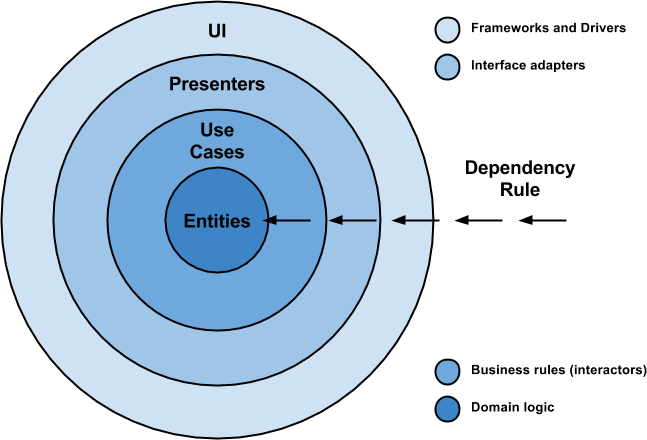 In this sample code the executeUseCase is really simple. However in real world application the use case could be more complicated.

The data layer is where we retrieve the data from the storage. The storage can be anything or anywhere as long as it implements the MovieRepository through which business layer talks to the data layer.

The above sample code of data layer implements the MovieRepository from the domain layer. The MovieDataRepository gets the data from the MovieDataStore. We can see that where the data comes from does not really matter. In the above sample code, we can retrieve the data from SQL or from some web API. When the data is passed on to the business layer all it gets is the data it required. All the complexity of where and how the data comes from is encapsulated within the data layer. MovieEntity in mapped to Movie using a transformer before sending it to the business layer. Life of Entity object only reside within the data layer and never get out.

Now that we have mechanism to get the data from the data layer and perform our business logic in the domain layer, its time to render this in the screen.

In the above sample code for presentation layer, Presenter has logic of talking with the business layer. It also talks with the View and passes data it requires. However it does not have any framework specific logic. So if in future the business requirement changes and we need to build a web application with same business requirement, we can simply create a new NowPlayingView for web which will display now playing movies in the browser.

The amount of code to type for a non trivial application could be time consuming and not worth the hazel if we are absolutely sure that the requirements will not change. However for medium to large projects this architecture is highly recommended.I will soon write another post where we will update UseCase to use Observables from RxJava. Doing so will allow these use case to run on background thread without blocking the main thread. Google have recently released Lifecycle aware components, ViewModel and LiveData in the new android architecture components. It will be interesting to look into where these components will fit into the clean architecture.